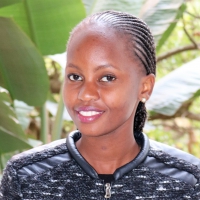 Throughout this project, Phinius got to learn data analysis using STATA and was also exposed to Flow cytometry because of the interest she had in it. She subsequently became part of the Lymphoma Diagnostics by use of Flow Cytometry Team in Botswana. She was also awarded an opportunity to further this knowledge at the Ragon Institute, USA, for training on more Immunological techniques.

Occult Hepatitis B (OBI); the presence of HBV DNA with undetectable surface antigen (HBsAg) is undetectable using standard serological assays and can be missed during routine blood donations screening. Molecular OBI screening is critical, however expensive when using commercial HBV viral load assays which is not practical in most low resource settings. Phinius's project evaluated a less expensive in-house real time PCR assay for detecting OBI.They tested 80 samples from 54 OBI positive and 26 HBsAg positive individuals from a cohort of HIV infected adults initiating HAART in Botswana. HBV DNA levels were determined using COBAS® AmpliPrep/COBAS® TaqMan®HBV Test, version 2.0 (Roche Diagnostics, Mannheim, Germany) with a limit of detection of 20 IU/ml. For the in-house (IH) assay, samples were extracted using QIAamp® DNA Kit (Qiagen) and detected using ABI 7500 Real Time PCR System using TaqMan® Universal PCR Master mix (IH-TaqMan) and the Kapa Probe Force qPCR Kit Master mix (IH-Kapa). We estimated agreement and compared sensitivity of the IH assay to  the commercial assay in detecting HBV DNA. The amplification rate using IH-Kapa was 83.8% (67), compared to 58.8% (46) using the IH-TaqMan. A total 51.2% (27/54) of the occults were undetected with the IH-TaqMan whereas 13% were undetected using IH-Kapa. Of the 8 samples undetected by the commercial assay, IH-Kapa detected (6/8, 75%) and the IH-TaqMan detected (3/8, 37.5%). Agreement between IH-Kapa and the commercial assay was 78.8%. IH-Kapa assay had a sensitivity of 87% whereas the IH-TaqMan assay had 59.7%. The estimated cost for the commercial assay ($65/test) is at least twice the price of IH-TaqMan and at least three times the cost of IH-Kappa ($20/test). In conclusion, the IH-Kapa was more accurate and less expensive for OBI detection compared to IH-TaqMan and commercial assays. The potential use of the IH-Kapa method for OBI detection warrants further investigation.

In this project, Phinius was able to learn how to efficiently use the 7500 Real Time PCR System. She also learnt DNA sequencing through the use of the Genetic Analyzer 3130xl.

Furthermore, throughout her SANTHE internship, she received training on abstract submission and presentation skills.